The Boundary Project DJ’s for November 2018

Close Up Things is a DJ/Producer/Programmer known for his diverse sets in London and beyond appearing as resident/co founder of charity party Vinyl Fantasy also appearing at popular London Club Nights Fade to Zaire,SGP,Latitude,LoveBox,Les Nuits Secrets,Pop On Over,Lucy’s Disco, Groove Control and Lip Sweat. He can also be found on the airwaves on Musicbox radio/Wick Radio.

Expect mixes that bridge Latin/Carribean rhythms,Funk, Soul,Jazz, House and Disco while being unafraid to play tracks that you forgot you knew with plenty of fresh introductions.

Soul Fools are a Dj collective playing the very best in Soul/Funk/Boogie/Disco/House/Edits/Bootlegs and especially for Tra Tra all of these with a French spin. You can also catch them the 1st Monday of the month 3-5pm on Music Box Radio

Georgia Girl (or GG as she is more affectionately known) has been a firm fixture on the London circuit for over a decade.

Whilst working at one of London’s most loved record stores (Blackmarket Records/BM Soho) for over six years, she supplied quality vinyl and sourced some of the best underground releases. Subsequently she built up her own vast and varied record collection.

With an obvious and keen interest in groovy sounds – and a particular enthusiasm for vinyl – Georgia was considered a valuable member of staff and asset to the store.

Having held numerous London residencies, a residency in Rome and Berlin with a string of international bookings, it really is no wonder that Georgia has had the pleasure to play at underground institutions such as Fabric and Club der Visionaere. She regularly plays alongside talented artists and is highly regarded amongst her peers.

Resident and founder of Lucy’s Disco and female-centric Womb 2, Lucid Stannard has been spreading her wings rapidly throughout London and as far as Berlin, Croatia and even Uganda. Spotted by London’s party heavy weights Percolate in early 2016, they gave her a slot on their stage at Secret Garden Party festival and since then she has played with A Guy Called Gerald, Kay Suzuki, Cinnamon, Rune Lindbæk, PBR street gang, Mark E, the Revenge, OR:LA, Dan Beaumont, Rayko, DEBONAIR, San Soda, The Reflex, Nadia Ksaiba, Anthony Naples to name a few. She has spun her tunes at parties like Gottwood, Secret Garden Party,  festival no 6, Love International, Percolate, Future Boogie, Locomotive and the Good life. Not content with showing prowess for the dance floor, Lucid also has a growing number tune in to listen to 2 radio shows on Balamii and Netil Radio. Lucid recently has created mixes for Slothboogie and Rinse FM. As Slothboogie said in her guest mix intro “A definite one to keep your eyes and ears open for”.

Bedroom Disco are Flora and Mouse, playing Jazz, Soul and Disco from around the world. You can hear them brightening up mornings  11am-1pm Saturdays on Netil Radio. When not grooving the airwaves you can find these guys killing dance floors locally around East Londons Oslo, Mick’s Garage, Total Refreshment Centre, Jaguar Shoes to name a few.

ROOFTOP ORANGERY
is open for bookings!

ROOFTOP TERRACE IS OPEN ON A WALK-IN BASIS ONLY 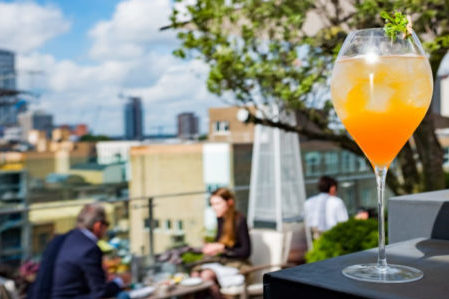